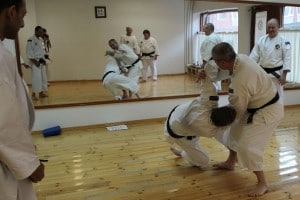 Over the weekend, 4 to 5 February we had a small gasshuku (training camp) with our friends from Harrow shibu in England. In addition to a number of members in Karlstad Shibu and then of course our visitors from Harrow, there were another two branches represented over the weekend. Karlstads Studenter Shibu had their shibu-chō Åke Olsson attending on Saturday, and Jörgen Andersson on both days. Skövde was represented on Sunday by Peter Thorvald.

The group from Harrow arrived on Friday and after we installed them all where they were staying it was time for pizza and watching DVDs at Anders’. Originally there had planned to be six people from Harrow but Dan Biggs was unable to attend and had to cancel at the last minute. We look forward to have Dan here next time (Dan has visited us a couple of timed before).Those who came to visit us were Steve Williams, Graham, Copper, Jonny Daymond, Piyush Naidu and Soteris Zannettou. For Soteris and Piyus it was the first time to come to Karlstad.

Anders and Åke have known Steve since 1989, and in recent years when now it’s easier with the internet, etc. to stay in touch, it has become easier to see each other more frequently than only at the major international camps. It has almost become a tradition that Harrow will visit to Karlstad once a year.

On Saturday morning it was -17 degrees and the sun was shining when it was time to start the weekend’s training. The training began with a short kihon and then there was a review of the hōkei (techniques) that the participants had questions about, there was also a lot of focus on the techniques that will be moved in the new kamoku hyō that soon will be introduced.

The teaching of hōkei was done together by Anders-sensei, Steve-sensei and Åke-sensei. Åke, Steve and Anders also took the opportunity to work together and practice their own techniques.

Steve Williams, who is a bit crazy about ice hockey (he plays himself in two different teams at home in England) had also requested that we would go to a hockey game in the afternoon so the training ceased already at 14 o’clock so that all British, and some from Karlstad branch, would have time go to the game Färjestad BK – Skellefteå AIK. It was the first time they saw a hockey game live for several of our English guests and it was much appreciated. Färjestad also managed to win the match 3-0. 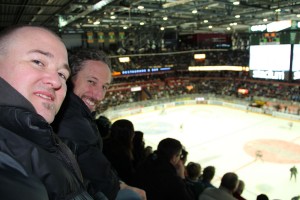 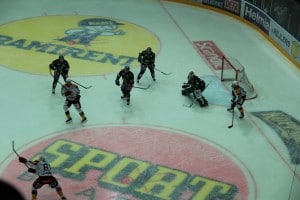 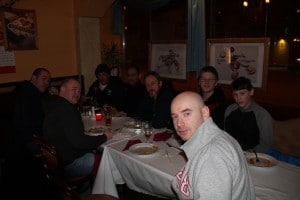 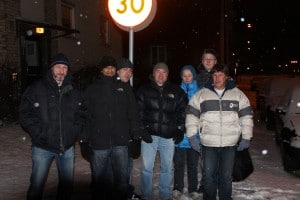 After the ice hockey, we went out for dinner together which was followed by Shorinji Kempo video at Anders’. Among other things we watched the ”Shorinji Kempo sono giho to oshie” 1 & 2, and a number of DVDs from various Rakuto-sai (annual demonstrations that Rakutō dōin holds).

Sunday’s training began with Steve-sensei first holding a warm up with a good pace so that everyone got going. Then there was a session with a focus on reaction training and focus on taisabaki (body movement). It was very challenging to handle multiple attacks from the very short distance.

We had lunch at the local pizza place across the street from the dojo and then continued the training in the afternoon. That session focused on questions and answers. Among other things we went through the details of pair forms of tenchiken 1 & 2, ryūōken 1, giwaken 1 etc. There were a lot of confusions about how they start and finish.

Here are two group photos from Saturday and Sunday. However, a few people managed to leave before we shot the picture. 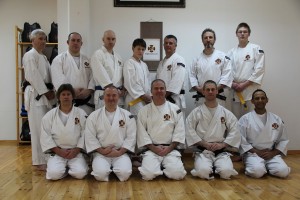 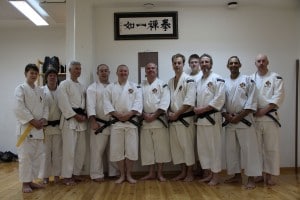 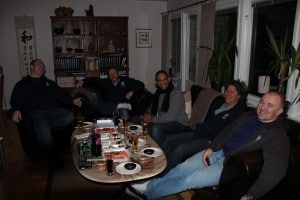 Sunday evening for our British guests ended with sushi and more viewing of Shorinji Kempo video, looking in books, etc. at Anders’ home. There were also a lot of Shorinji Kempo related discussions until quite late.

On Monday, before it was time for our guests to travel to Stockholm and the airport so it was a trip out to Skutberget (a recreation area just outside Karlstad). Although it has not been so cold this winter it is ice on Lake Vänern, some of the British were very skeptical as to whether they would dare to go out on the ice, but in the end it went well when we were able to show how thick it was. However, there was a fairly short walk because the wind was quite strong, so instead it became an early lunch with traditional Swedish dishes. 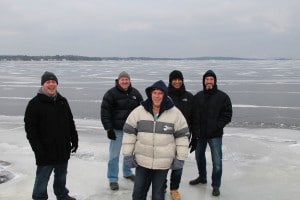 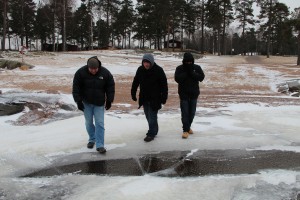 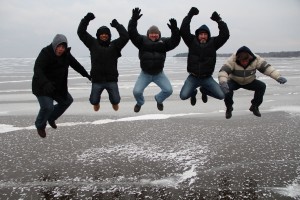 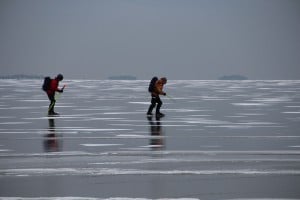 Here are some comments from our guests with their impressions after the weekend:

Jonny Daymond:
The weekend training at Karlstad was fantastic in every respect. Anders Sensei is a wealth of knowledge on Shorinji Kempo techniques and philosophy and his explanations are very easy to understand. His Kenshi are always great to train with as they share his enthusiasm for the art in equal measure.
We were also lucky to be able to receive instruction this weekend from Åke Sensei and our own Sensei Steve Williams giving us the benefit of three high ranking instructors shared between a relatively small group of Kenshi.
Outside of training we got to watch a live ice hockey game, my first, and the local team FBK Karlstad won 3 nil. Great to watch.
I look forward to doing it again soon but will definitely wear long johns and a full face ski mask next time if we go for a walk on the frozen lake. Freezing with a capital F!
Thanks to Anders Sensei, Åke Sensei and Steve Sensei and all the Kenshi from Sweden and the UK who took part.

Soteris Zannettou:
I came away from this weekends training with an understanding that I must look back to my basic training and enforce these principles in my more advanced techniques. To always correct myself when mistakes are made through my own lapse in discipline and not wait for my seniors to point out these mistakes before I correct them.

Piyush Naidu:
We spent a fabulous weekend in Karlstad.
Good training and good company. Throughout the training there was a theme of focussing on basics. This is something that I myself was guilty of neglecting.
We learned that good basic form leads to clean and economical technique.
Looking at the godan instructors showed this.

Anders Sensei showed a new way to apply juho techniques which I look forward to trying. The reaction-flow training was very beneficial and provided a good source of realism. It was nice to make new friends and strengthen the bond between Harrow dojo and Karlstad dojo.
We look forward to our next meeting.

Graham Cooper:
As in the past we were met with a generous spirit and warm heart, the training was in equal measure for both mind a body , despite being very cold outside, the physical movement kept us warm.
The commitment of the Swedish kenshi is always good giving their time for us over the whole weekend.

Swedish version of the kamokuhyō