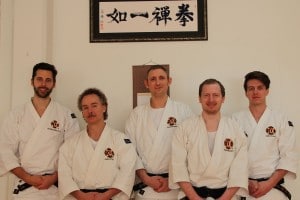 On the 31 of March there was a national Dan Examination in Karlstad.
It started at 10.00 with the written test and then the technical test followed , which took almost three hours.

After the grading there was also time for feedback where everyone was informed on what was good and what they need to focus on trying to improve.
There were four people who tested for Nidan (2 Dan) and one who tested for Sandan (3 Dan).
A big Congratulations! to those who passed their grading test: